Timothy "Timmy" Brisby is the youngest son of Mrs. Brisby from The Secret of NIMH and the main protagonist of The Secret of NIMH 2: Timmy to the Rescue. He hardly speaks in the film, as he spends most of his appearances there sick from pneumonia, but all of them in bed. However, he asked that he wanted to come outside with his family, but Mrs. Brisby (his mother) refused because he might catch the fever again.

Timothy is 6 years old (by human age) and is the youngest son of the Brisby family. By what fans from thornvalley.com and etc. have said about Timothy, he has his father's intelligence and appearance.

Timothy is the youngest son of the Brisby family who was sick with pneumonia and was seen only a few times in the film.

In the sequel, he's chosen to be lead the rats out of NIMH and the main protagonist. 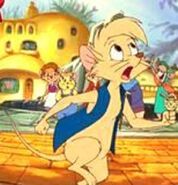 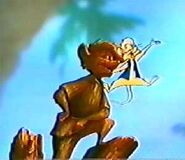 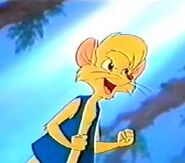 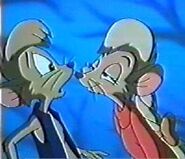 Retrieved from "https://donbluth.fandom.com/wiki/Timothy_Brisby?oldid=31171"
Community content is available under CC-BY-SA unless otherwise noted.