The character of the same name from the book fairy tale, Thumbelina

Princess of the fairies
Cornelius's wife

To find her way home and marry Prince Cornelius (succeeded)

Grundel Toad, being kidnapped, getting lost, being forced to marry, winter, being away from home

Flight (when she gains wings)

She is found by Cornelius, gets her wings, and they get married

"Doesn't anybody care what I think?!"
Thumbelina is the main protagonist in the film of the same name.

Thumbelina is a sweet and very beautiful teenage girl with long, strawberry blonde hair, blue eyes and glossy pink lipstick. Despite her small size, she has a big heart and is a romantic. She can easily be brought down by the world but is known for having good friends to keep her afloat.

She was born in a barley corn plant. When her mother kissed the tulip, it opened and revealed a young girl, full grown, and no bigger than a thumb, and, in jest, she was named "Thumbelina". She had trouble with her size, and felt alone and was not sure of her place in such a "Big World". As her Mother was going to read a story about "The Noble Dog", She was tired and wanted to hear about little people, which her mother turn the pages to the fairies, and she was told the wings produce magic to help them fly. Thumbelina felt more alone and different than the others, and she wished she was "Big", which Her mother tells her to be nothing but the way she is. As her mother bids her goodnight, Thumbelina sings "Soon" as of hopes of finding another small person like her, so she wouldn't face the world all by herself. She meets a fairy who sabotages a page, and causes her to hide in a teapot, she notices that he apologizes and is not a threat, at first, she wasn't sure if she was dreaming, She then spoke when he came close and was excited.

As Hero was going to attack, she intervened and stopped them from attacking. She introduces herself, and he greets her causing a tired Hero to go asleep, as they get to know each other in the song "Let Me Be Your Wings", She hear The Queen calling for Cornelius, whom the Fairy introduced himself before the song, and he confesses he is the prince, whom Thumbelina wanted to meet, and she accepts Cornelius's offer, as he left for his parents. She woke up on the stage of the Toad's boat where Mrs. Toad brought her the night before to be wedded to her son, Grundel the Toad. They leave her on a lily pad while going to fetch a priest, but a friendly swallow, Jacquimo (the narrator of the film), overhears Thumbelina's cries for help and frees her. Jacquimo's friends, the jitterbugs, promise to help Thumbelina get home safely while Jacquimo sets off to find Cornelius. Meanwhile, Cornelius learns of Thumbelina's kidnapping and ventures out to find her. While trying to get home with the help of some young jitterbugs, Thumbelina is ambushed by Berkeley Beetle, who scared the jitterbugs off.

He's enamored with her and her singing, and agrees to show her the way home, provided that she sing at his Beetle Ball first. She is well received by the bugs until the costume disguising her as a butterfly falls off, at which point they declare that she's "ugly". Beetle's opinion of her swiftly changes and he kicks her out without giving her the help he promised. Both Jacquimo and Cornelius are incapacitated by the weather: Jacquimo accidentally impales his wing on a thorn and is eventually knocked out by the extreme cold, while Cornelius falls into a lake and is frozen under the ice. Grundel, hearing one the jitterbugs mention Beetle, tracks him down. Beetle suggests using Cornelius the fairy prince as bait. Grundel blackmails him (by stealing his wings) into helping him get Thumbelina back. Beetle and his men find Cornelius trapped in the ice and take him back to Grundel. Thumbelina almost freezes to death, until she's found and taken in by the greedy Ms. Fieldmouse. She informs her of Cornelius's supposed demise, saddening Thumbelina too greatly. The two take some corn cakes to Ms. Fieldmouse's neighbor, Mr. Mole. Mr. Mole tells them about a dead bird he found in his tunnel earlier that day. It turns out to be Jacquimo, who Thumbelina discovers to be only unconscious. Mr. Mole confides to Ms. Fieldmouse that he would like to marry Thumbelina and will pay her handsomely if she gets the girl to agree. Thumbelina, heartbroken over Cornelius's death, accepts. Jacquimo soon awakens and leaves to find Cornelius, refusing to believe that he is dead. Meanwhile, Beetle brings Cornelius's frozen body to Grundel and informs him that Thumbelina is going to marry the Mole.

After the two leave to stop the wedding, the jitterbugs thaw Cornelius's body out. As she's going up the aisle, Thumbelina realizes that she can't marry someone she doesn't love. As she refuses, Grundel and Beetle crash the wedding. A chase ensues, with Beetle, Grundel, and the wedding guests trying to stop Thumbelina from getting away. Cornelius appears and fights with Grundel until the two fall into a chasm. Once outside and free, Thumbelina is reunited with Jacquimo, who insists he's found the Vale of the Fairies. He takes her to what looks like a frozen patch of weeds and tells her to sing, which she grudging does. As Thumbelina gives up hope, the ice thaws and Cornelius appears. The two marry, and at the wedding, Thumbelina is granted wings and became a fairy princess. Thumbelina and Cornelius live happily ever after. 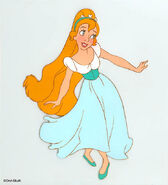 Thumbelina emerging from the rose

Differences from the source material