Mrs. Jonathan Brisby (Elizabeth Hartman), a very beautiful, shy and timid field mouse, lives in a cinder block with her children on the farm of Paul Fitzgibbons. She is preparing to move her family out of the field they live in as plowing time approaches; however, her son Timothy has fallen ill. She visits Mr. Ages, another mouse and old friend of her late husband, Jonathan, who diagnoses Timothy with pneumonia and provides her with some medicine from his laboratory. Mr. Ages warns her that Timothy cannot go outside for at least three weeks or he will die. On her way back home she encounters Jeremy, a clumsy but compassionate crow. Jeremy is found tangled in string to the point where he can't fly away.

Brisby helps him free by breaking parts that are around his feet. Some humor occurs, but Brisby tells him to keep his voice down due to the possibility of the farmer's cat Dragon roaming around. It turns out that Dragon was out in the field hunting birds and passing close to where they are. Jeremy begins to panic and hangs upside down, he looks down the hollowed-out log to see something running down the log. He freaks out while flying away quickly only for the string to restrict him. It turns out that what he panicked from was a rabbit. Jeremy laughs it off thinking Brisby was scared too, But while this happens, Dragon is seen walking down the log having heard the commotion. Jeremy suddenly reveals he has an allergy to cats, which he suddenly has a reaction and sneezes only for him to sneeze a second time which he ends up sneezing in Dragon's face who was right behind him and angers the cat. A chase begins with Dragon attempting to catch Brisby. She narrowly avoids him with the help of Jeremy. Brisby is suddenly stuck at the end of a branch on the edge of a river near a water mill. Dragon pounces on her and misses, causing the branch to collapse, sending him into the river. Oddly, Dragon is able to handle the fall and gets himself out of the water. Brisby takes shelter in a lobster trap in the mill, She is saddened due to her losing the medicine for her son, but her sadness is stopped when Jeremy reveals that he found the medicine. She is overcome with joy and thanks Jeremy.

The next day, the spring plowing begins with the farmer attempt to start his tractor. Mrs. Brisby realizes that the is coming earlier then she thought, Miss Shew reminded her that she should have moved. Suddenly the tractor starts up causing Miss Shew to panic alerting nearby animals that the plow is coming. Brisby is able to get all but Timothy out of the house, which Brisby tries to stop the tractor herself to save him which Auntie Shrew says is suicide. She climbs onto the plow but gets trapped. Miss Shew boards the plow and head to the tractor and attempt to disable by pull the wiring and final breaking the fuel line causing the tractor to stall just before the plow hits the stone. Mrs. Brisby herself knows she must come up with another plan before the tractor comes again. With the help of Jeremy, she reluctantly visits the Great Owl, a wise creature living in the nearby woods, to ask for help. He tells her to visit a mysterious group of rats who live beneath a rose bush on the farm and ask for Nicodemus.

Mrs. Brisby goes to the rats' home, where she is amazed to see their use of electricity and other human technology, as they have taken on medieval. She meets Nicodemus, the wise and mystical leader of the rats, and Justin, a kind and friendly rat who is the Captain of the Guards, as well as a dark, ambitious rat named Jenner, who plans to kill Nicodemus in order to become a leader. She learns that her late husband, along with the rats and Mr. Ages, was a part of a series of experiments at a place known as N.I.M.H. (which stands for the National Institute of Mental Health). The experiments had boosted their intelligence to human level, allowing them to easily escape. However, the rats have concocted "The Plan", which is to leave the farm and live without stealing electricity from humans, and relocate to Thorn Valley. Nicodemus then gives Mrs. Brisby a beautiful red amulet called the Stone, which gives magical power when its wearer is courageous.

Because of her husband's prior relationship with the rats, they agree to help Mrs. Brisby move her home out of the path of the plow. Mrs. Brisby volunteers to drug Dragon so that they can complete the move safely. Only mice are small enough to fit through the mouse hole leading to the house; Jonathan was killed by Dragon while trying, and Mr. Ages broke his leg in another attempt. Later that night, she successfully puts the drug into the cat's food dish, but the Fitzgibbon's son Billy catches her and convinces his mother to let him keep her as a pet. While trapped in a birdcage, she overhears a telephone conversation between Farmer Fitzgibbon and NIMH and learns that NIMH intends to come to the farm to exterminate the rats the next day to which Fitzgibbons gladly accepts stating they can "bulldoze that rose bush right out of there." She manages to escape from the cage and runs off to warn Justin.

Meanwhile, the rats move the Brisby home during a thunderstorm. However, Jenner, who wishes to remain in the rose bush, cuts the ropes holding the cinder block, causing the scaffolding to catapult towards Nicodemus, crushing him to death, and making it look like an accident. Mrs. Brisby arrives and tries to convince the rats that NIMH is coming and that they must leave immediately. However, Jenner is angered by her claims and attacks her. Alerted to the situation by Jenner's hesitant accomplice Sullivan, Justin rushes to Mrs. Brisby's aid; a sword fight between Justin and Jenner ensues, during which Justin realizes Jenner was directly responsible for Nicodemus's death. Justin stabs Jenner in the stomach and proclaims that they are continuing to relocate to Thorn Valley. Jenner climbs up onto a rock to try and kill Justin, but Sullivan, mortally wounded by Jenner, throws his dagger at Jenner's back, killing him and causing him to fall off the top of the rock.

After the duel ends, the cinder block begins to sink into the mud. Realizing that her children are still inside, Mrs. Brisby and the rats try to lift the block out of the mud, but fail. However, Mrs. Brisby's will to save her children gives power to the amulet, which she uses to lift the house out of the sinkhole and move it to safety from the plow.

The next morning, the rats have already gone to Thorn Valley with Justin as their new leader, and Timothy has begun to recover. Jeremy also eventually finds "Miss Right", an equally clumsy crow, and the two fly away together laughing merrily. 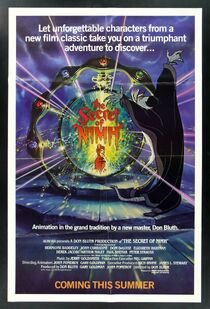 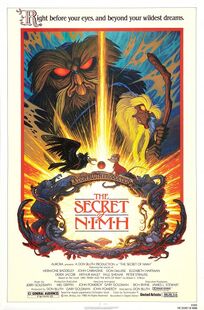 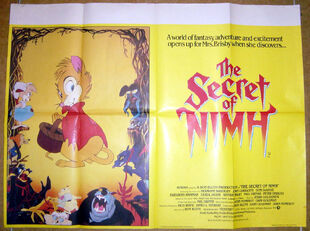 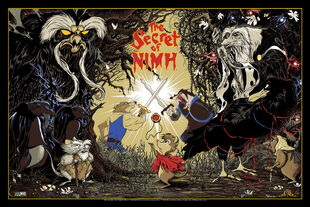 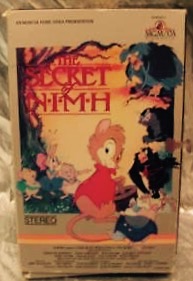 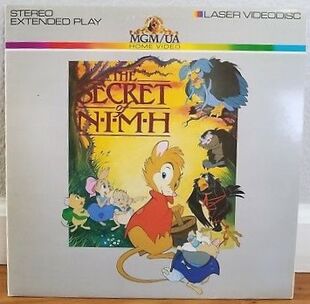 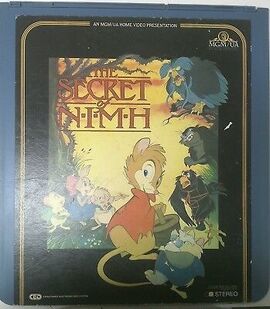 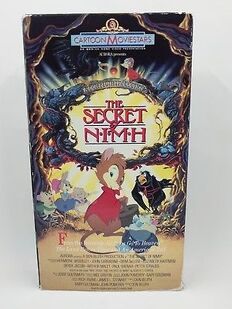 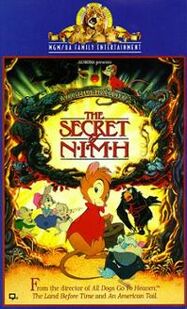 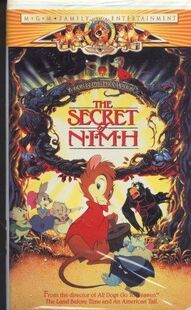 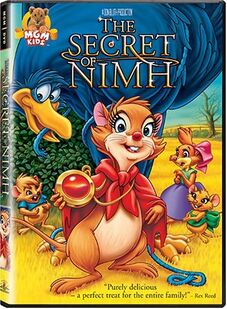 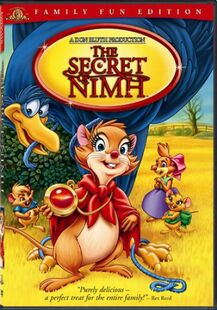 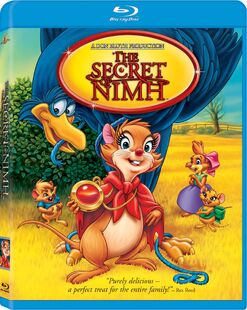 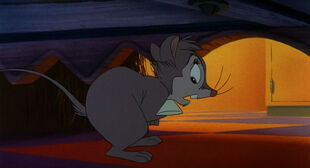 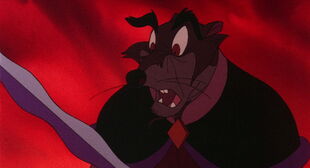 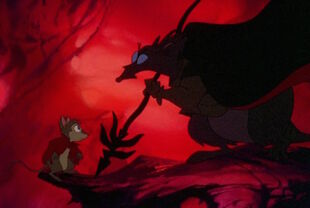 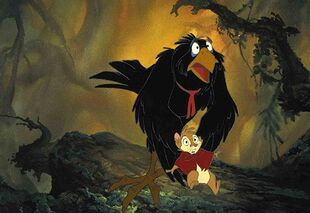 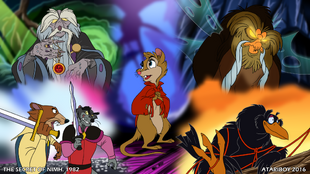 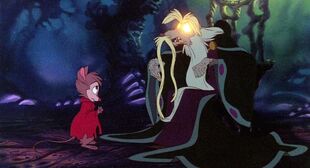 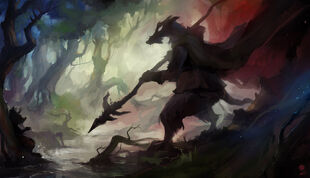 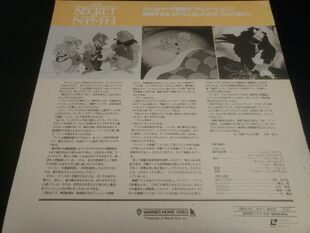 An advertisement in a Japanese magazine describing the film: translation needed 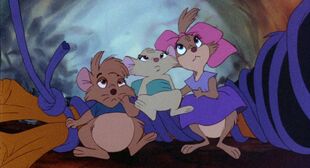 The film garnered widespread critical acclaim for being one of the most vibrantly animated films of its time and has earned a 96% "Certified Fresh" approval rating on the Rotten Tomatoes website, with the site's critical consensus reading, "The Secret of NIMH is a dark, well-told tale that respects its young audience enough to not tone down its subject matter". The film has now gained a very popular cult following beyond its release, amongst the furry fandom, fans of animation, fans of Don Bluth, fans the original novel by Robert C. O'Brien and the sci-fi/fantasy genre alike and people like Doug Walker (Nostalgia Critic on Channel Awesome) who claim it to be one of their all-time favorite movies.

Despite such a high level of praise from both critics and audiences alike, the film was only a moderate success at the box office, making $14,665,733 out of a roughly $7,000,000 budget, attributed to a combination of poor promotion, regionally-staggered release dates and competition from Disney's Tron, Jim Henson's The Dark Crystal, ITC Entertainment's The Last Unicorn and Steven Spielberg's blockbuster E.T. the Extra-Terrestrial.