Tanya Mousekewitz is the cute and lovely big sister of Fievel Mousekewitz in An American Tail. She is the tritagonist of the second film and a minor supporting character of all other films.

The oldest Mousekewitz sibling, she loves her little brother a lot. Her singing voice is thought by others, especially Cat R. Waul, to be beautiful.

In An American Tail, she wears a red babushka (headscarf), a blue blouse with a navy jumper dress and frilly white ankle-length pantalettes. She was also much closer to Fievel's age. She looks much the same as this in The Treasure of Manhattan Island (pictured). In The Mystery of the Night Monster, she looks taller than in the last movie, and her hair is very short. She has stopped wearing her babushka and instead wears a slimmer, professional-looking white blouse, and purple ankle-length skirt.

In An American Tail: Fievel Goes West, she was much older likely in her early teens and her age range from Fievel was increased. This was her oldest incarnation, as in later sequels she is aged down again. She dropped her red babushka for a long ponytail and an orange and brown dress. She had big aspirations to become a singer and had a beautiful singing voice, which didn't fit in well with her New York neighbors (as Mama Mousekewitz prepared some of the food they throw as the family dinner).

Tanya plays very little part in the first film. She gets a babushka for Hannukah while Fievel gets his hat. She has her doubts about leaving Russia after the cat attack but goes along with her family to America anyway. She is as hard hit as the rest of her family by Fievel's apparent death but she never loses hope that he survived falling off the ship somehow. She sang the heartwarming but distant duet "Somewhere Out There" with her brother Fievel when they were separated. Whenever Tanya begs her father to look for Fievel, it turns out Fievel is nearby but they don't see each other. She's finally proven right late in the film when the Mousekewitz's meet Tony and Bridget. She's last seen riding on Henri's back with Fievel at the end of the film as they check out the newly built Statue of Liberty which she said was so beautiful.

Tanya is given a much larger role in the sequel. At the beginning of the film, it is shown that Tanya wants to be a famous singer, but her talents go unappreciated. After moving to Green River, Cat R. Waul finds her singing the song "Dreams to Dream" in the streets and is instantly entranced by her voice before even seeing her. He then takes Tanya under his wing, entitling her as "The Diva" and having her perform at a saloon for his gang, with Miss Kitty to be her mentor. She instantly wins over the cats with her song "The Girl You Left Behind". After the praise she has received by her "public", Tanya becomes somewhat delusional from her fame. Seeing Waul try to put the mice of Green River into a giant mouse trap during the film's climax snaps her out of it, though, and by the end of the film, she realizes she can still be beautiful by being herself, washing her makeup off.

An American Tail: The Treasure of Manhattan Island

In this film Tanya is again younger, supporting the theory that it takes place just after the first movie but before the second. (Or the 2nd film, along with the TV series, was all a dream sequence) Tanya's personality has become sassy and sarcastic in this movie, and she gets very jealous of her brother getting to go on adventures all the time. When adding her sarcastic comments to family arguments, she is told "Tanya, don't help!" by her parents. She forms a sisterly bond with Cholena when she is brought to the surface, helping make a gorgeous dress for her and showing her around New York. When her parents agree to let her come with to bring Cholena back home and protect her from the police she is thrilled at finally getting to participate in an adventure. And when Tony is fighting Scuttlebutt, Tanya comes to Tony's aid by punching Scuttlebutt right in the face. She is last seen at the celebration ceremony of the new labor union for the cheese factory, and like Fievel, she unhappily glances at Tony (as he ogles over Cholena) to set him straight. Her role in this film is displeased by fans.

An American Tail: The Mystery of the Night Monster

Here Tanya has a job as a secretary at the Daily Nibbler, a job Tony helped her get. She wears a professional dress and tries to act more adult, partly because of the crush she has on editor Reed Daley, which this is arranged due to the staff’s negative attention with her appearance, involving her jealousy towards her sibling, from the previous film. She's embarrassed to have Fievel tag along with her, afraid he'll make her look less professional. Reed Daley doesn't return the feelings, though and ignores her. Tanya's hopes are dashed when Nellie Brie and Reed get together at the end of the movie, and in the final scene where the family is at the beach, she laments that her life has no meaning. she later watches Fievel sleep beside Yasha (who is quite awake), and Tanya, Mama, Papa, Tony, & Tiger have a Group Hug. 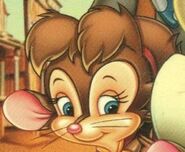 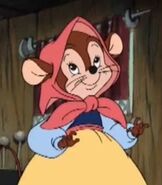 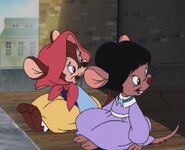 Tanya sings 'Somewhere Out There' in 'Fievel Goes West'

Tanya Mousekewitz is driving her space vehicle in outer space.
Add a photo to this gallery

Retrieved from "https://donbluth.fandom.com/wiki/Tanya_Mousekewitz?oldid=32432"
Community content is available under CC-BY-SA unless otherwise noted.