Rock-a-Doodle is a 1991 animated musical comedy fantasy adventure film loosely based on Edmond Rostand's comedy Chantecler. This film was directed by Don Bluth, produced by Goldcrest Films and released by The Samuel Goldwyn Company originally, and currently by Metro-Goldwyn-Mayer, and originally released in the United Kingdom and in Ireland on August 2, 1991, and in the United States on April 3, 1992. The film features the voices of Glen Campbell, Christopher Plummer, Phil Harris, Charles Nelson Reilly, Sorrell Booke, Sandy Duncan, Eddie Deezen, Ellen Greene and Toby Scott Ganger.

Chanticleer (Glen Campbell) is a proud rooster whose crowing wakes the sun up every morning (or so the other farm animals believe). His singing keeps the other animals happy and the farm free from downpours. However, one morning, Chanticleer gets in a fight with another rooster that was sent by the Grand Duke of Owls (Christopher Plummer), whose kind can't stand the sunlight. Chanticleer wins but forgets to crow and the sun rises without his singing. The other animals reject him and drive him out of the farm, causing a perpetual rainstorm and beginning the Grand Duke's reign of terror on the farm.

The story is revealed to be a storybook that a mother named Dory (Dee Wallace) reads to her 6-year-old son, Edmond (Toby Scott Ganger). Edmond grows concerned when his Midwest Tennessee farm becomes flooded from the rain. When Edmond's father, Frank, calls the family to help save the farm, his mother to stay where it’s safe as She helps hold Off the storm. Edmond realizes that Chanticleer is the answer to the problem and yells for him, only to summon the Duke himself. The Duke turns Edmond into a kitten for trying to interfere with his plans. Just as the Duke is about to devour Edmond, he is saved by Patou (Phil Harris), the basset hound who bites the Duke’s leg and Edmond drives the Duke off with a flashlight, as light is the owls' only weakness. Edmond also meets a magpie named Snipes (Eddie Deezen) and a mouse named Peepers (Sandy Duncan), who do not believe Edmond was once a human boy, but tell him they are journeying to the city to find Chanticleer. While the rest of the animals stay at Edmond's farm, Edmond, along with Patou, Snipes, and Peepers, sail to the city in a trunk. The Duke sends his nephew Hunch (Charles Nelson Reilly) to stop the crew from reaching the city, but Hunch fails to catch them.

Once they reach the city, they discover Chanticleer has taken the moniker "The King" in an Elvis-style show where he sings for an audience. As a distraction, Edmond's idol and Chanticleer's manager, Pinky Fox (Sorrell Booke), who had been hired by the Duke to keep Chanticleer away from the farm, get a chorus singer pheasant named Goldie (Ellen Greene) to distract him. Chanticleer is immediately smitten with Goldie, but she resents him for taking the public's attention away from her. When Edmond tries to talk to Goldie about Chanticleer, she mistakes him for the bad kitty told by Pinky and chases him away. After a time, Goldie begins to reciprocate Chanticleer's feelings and tells him that his friends had come to find him.

In the meantime, Edmond and the others are captured and imprisoned by Pinky and his guards to keep them from contacting Chanticleer and are locked in his trailer. Pinky turns on Goldie for informing Chanticleer of what has happened and blackmails Chanticleer with the possible threat of killing his friends into continuing with his movie. Edmond and the others manage to escape, though (thanks to Hunch's intervention), and with Goldie and Chanticleer in tow, they make their way back to the farm. The Duke and his minions have been waiting on the farm animals' supply of batteries to run out on their flashlight. They nearly make a meal out of them, but are driven away by the spotlight of the helicopter Edmond and the others are flying.

Edmond and the others try to get Chanticleer to crow, but he is out of practice and soon gives up. The Duke taunts Chanticleer in his stupor and strangles Edmond into unconsciousness when he tries to raise Chanticleer's spirit by chanting his name. Inspired by Edmond's selflessness and bravery, the other animals begin to chant Chanticleer's name in unison. Infuriated, the Duke transforms himself into a tornado to wipe out the farm and the animals. However, Chanticleer finally regains his confidence and crows loud enough for the sun to rise, shrinking the Duke into a harmless pipsqueak. Hunch, eager for revenge towards all the abuse He suffered from his uncle, attacks him with a flyswatter and chases him away.

With that, the sun finally came up as the flood waters recede. Believing that Edmond died, the animals mourn him until he transforms back into a human boy since the Duke’s Magic was lifted. Edmond awakens in his own room to his mother's voice, having been knocked unconscious by a tree that had crashed into his bedroom. He realizes it's morning and the sun had come out to save the farm from destruction. His mother suspects he had a dream, but Edmond is convinced it was real. After she leaves, Edmond, whose faith was restored in the characters, is now allowed to visit and watch as Chanticleer sings to raise the sun. As he is transported, all of his animal friends are happy to see him alive, well and human again.

On Rotten Tomatoes, it has a rating of 20% based on 15 reviews, with an average of 4/10, but actually ranked 6% ahead of A Troll in Central Park (having the audience score of 14%, another failure from Don Bluth).

The staff of Halliwell's Film Guide commended its "excellent animation", but complained of the "poor and confusing narrative" that "rendered [it] pointless".

"The young ones, who certainly don't give a sticky-fingered hoot about animation production values, are likely to have a good time with this. There are many passing delights. Composer T. J. Kuenster has some funny songs. They're not Ashman and Menken (The Little Mermaid songwriting team), but they're sprightly. The best is probably a Bach-like fugue number, in which the Grand Duke and his owlish goons sing "Never Let Him Crow" around a church organ. But in a movie like this, it ain't over till the rooster sings."

Roger Ebert gave the film two stars out of four; in his review, he gave mild praise to the songs and the animation and said the film may entertain younger audiences, but said the movie "doesn't feel as bright as it should."

In 2011, Total Film ranked Rock-a-Doodle as 24th among the 50 worst children's films ever made. 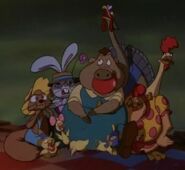 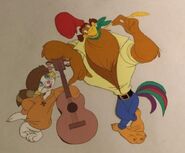 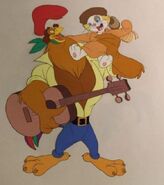 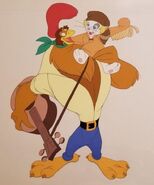