Red is the main antagonist of All Dogs Go To Heaven 2. He's voiced by George Hearn.

Red is a power hungry psychopath. Proud and cunning, he prides pure evil and being evil, and doesn't approve of any "entry level wickedness". In addition to being a hellish feline, he also has the many characteristics of a cat, he eats rodents, he hates water (proven near the end of the film during the battle between him and Charlie), and he thinks very low of dogs (especially his sidekick Carface), and desires full domination over all dogs on earth and heaven, which plays a keen role in his goal to obtain the horn.

He is very persuasive and deceiving, with the exception of disguising himself as an elderly dog to manipulate his victims, and also very hotheaded, as he tends to lash out whenever his patients are tried, such as when he snapped at Carface after his minion expressed enthusiasm over wanting to make money with the horn's power, still oblivious to what the horn would really be used for. But power seems to excite Red as well, proven when Red gets Gabriel's horn. He takes no notice of anything going on around him and when Carface says that Charlie and his friends are getting away Red merely says "Let them". 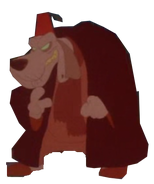 Retrieved from "https://donbluth.fandom.com/wiki/Red_(All_Dogs_Go_To_Heaven_2)?oldid=31518"
Community content is available under CC-BY-SA unless otherwise noted.