Petra, Beany, and Timmy are supporting characters and friends of Hubie in The Pebble and the Penguin. They later befriend Marina and Rocko towards the end of the film.

Petra is the slender and tall light yellow bird with an orange beak and blonde hair. She wears a big pink bow in her hair and red shoes with smaller bows.

Timmy is the smallest maroon bird with an orange beak.

Beany is the small dark blue bird (possibly a sparrow) with an orange beak and beige shoes.

Petra thinks love is just wonderful and romantic and thinks its lovely that Marina and Hubie are in love. Petra is the one of the three that initially is extremely intent to get Hubie and Marina together, secretly leading the three behind them to ensure things are going well like secret guardians.

Timmy is red and the youngest of three little birds who doesn't have an opinion in what he thinks about romance, but still wants to keep Hubie and Marina together.

The more bratty of the three little birds is Beany. He initially thinks the whole love story thing is too "mushy", and can be seen teasing the other two about their desire to help Hubie and Marina get together. However, as the story goes on and he has seen Hubie become lost and Marina growing lonely and worried about him, Beany grows to understand and sympathize with Marina, and does all he can to help Hubie, ultimately giving Rocko pointers for flying during his rescue of Hubie and Marina as Drake's lair collapses.

Role in the film

They are first seen after the first musical number in the film, where they fly over to Hubie's cliff where Hubie is daydreaming of marrying Marina. The three young birds love listening to Hubie's story of himself meeting Marina. But Hubie deems himself to be shy, and he then loses his balance and he slides down the hill where he bumps into Marina. It turns out that Marina doesn't mind about his accident.

That night, Petra, Timmy and Beany watch as Hubie and Marina spend the night on the cliff, expressing their feelings, with Hubie singing.

The three birds weren't seen again for the rest of the film, until much later on, while Hubie is finding his way back to Antarctica, Marina visits the cliff alone and sings the song that Hubie sung to her earlier. Petra, Timmy and Beany sadly watch as Marina expresses her worry for Hubie.

In the climax, they heard that Drake had kidnapped Marina and taken her to his tower. They watch as Drake carries Marina to his lair, but Hubie arrives back to rescue her. The fight is short-lived with Drake knocking Hubie out, but Petra, Timmy and Beany help Hubie regain consciousness and encourage him to fight back. Hubie eventually does so, and triumphantly defeats Drake.

Unfortunately, Drake survived his fall and reemerges from underneath parts of his tower, preparing to kill Hubie, Marina, and Rocko with a boulder, but his own tower collapses on top of Drake, killing him. All three birds played a role by helping Rocko fly at the end of the movie by grabbing his legs to slow him down to gather his windspeed. They give Rocko the thumbs up before flying away and are not seen for the remainder of the film. 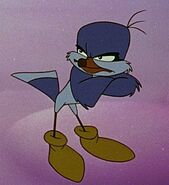 Beany
Add a photo to this gallery
Retrieved from "https://donbluth.fandom.com/wiki/Petra,_Timmy,_and_Beany?oldid=29507"
Community content is available under CC-BY-SA unless otherwise noted.