Martin Brisby is 9-10 years old (by human age) and is the eldest child of the Brisby family. A running gag is when he has a toxic rivalry with Auntie Shrew, because he hates it when she comes over to babysit and argues with her. But he does care for his family, especially when Mrs. Brisby scolds him for being mean to Auntie Shrew, he feels bad for what he did and apologizes.  He may somewhat have some similar traits to his father such as personality as well as physical appearance.

At the beginning of the movie, Martin is very jealous of Timothy Brisby for having been elected by Nicodemus as being the future hero when Martin feels he's much more the hero type than his brother. However, while Timmy is studying with the Rats of NIMH in Thorn Valley, Martin is kidnapped by NIMH researcher Dr. Valentine, who leads further experimentations on him, believing him to be a regular mouse. Unbeknownst to him however, Martin is already the son of a genetically-engineered mouse, and the treatment he subjects him to makes him turn completely mad and also evil, while also improving his intelligence to almost superhuman level. Having become a threatening mad scientist, Martin betrays Dr. Valentine and takes over the NIMH laboratory and tools, using them to create an army to take over Thorn Valley. His plan is however foiled by Timothy, Martin having turned out to be the threat Nicodemus's prophecy was referring to. Martin is captured and brought back to Thorn Valley, where the Rats manage to heal the damage done by Valentine's experience and turn him back into his normal, non-evil self. 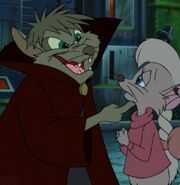 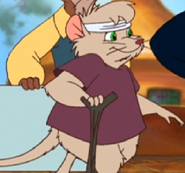 Retrieved from "https://donbluth.fandom.com/wiki/Martin_Brisby?oldid=23894"
Community content is available under CC-BY-SA unless otherwise noted.