Madame Mousey is the main antagonist in An American Tail: The Mystery of the Night Monster, the fourth and final sequel to the classic American Tail. She is a miniature french poodle who has started living among the mice about this time, appearing at every crime scene where the Night Monster, Twitch has struck, claiming to be a fortune teller. She is also the mastermind behind the night monster all along. She replaced Mr. Grasping as the main antagonist due to being viewed as a racist character. She is voiced by Candi Milo.

She faked being a soothsayer to get money from the mice. She created the Manhattan monster to get rid of the rodents because when she ran away from her owner, the other dogs didn't want to be around a dog who looks similar to a rodent. She snapped and got cats to help her make a monster to wipe away all the rodents of New York. She locked them in crates and sold them to cats to be eaten. In the end, Fievel Mousekewitz knocks her out by using a live wire to shock her. At the end of the fight with the cats, Tiger and Tony catch Mousey from escaping into the sewer, and the dog council sends her back to her owner. She claimed it was even worse than going to the city pound. 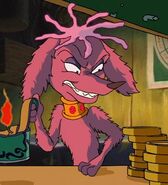 Mousey puts up her paw fist 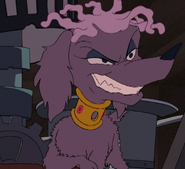 Mousey escapes
Add a photo to this gallery

Retrieved from "https://donbluth.fandom.com/wiki/Madame_Mousey?oldid=30367"
Community content is available under CC-BY-SA unless otherwise noted.