Ludmilla is the true main antagonist of Bartok the Magnificent. She is voiced by Catherine O'Hara.

Ludmilla is a Russian noble of great influence in Prince Ivan's court. She sees his plans to let the people govern the country as a mistake and a threat against her own power. She is subtle, though, so.she organizes the kidnapping of Prince Ivan and puts the blame on the witch Baba Yaga, sending Bartok on a false trail, hoping the witch's trials will dispose of the bat.

Bartok goes to the Baba Yaga's house in the Iron Forest. After he successfully performs the three trials requested by the witch, she brews a potion for him. Once the potion is finished, she reveals the location of Prince Ivan and that she didn't actually kidnap him.

The magic potion was made to help out Bartok in freeing the Prince. Its mystical powers makes the imbiber turn into on the outside what he is on the inside - tenfolds.

In the meantime, Ludmilla uses the Prince's absence to set herself up as the new ruler of Russia. Bartok returns to the castle and claims that Prince Ivan has never been kidnapped. Ludmilla, accompanies Bartok to the tower, where Ivan has been held. Her treachery revealed, she locks Bartok in with the prince and takes the potion from Bartok and drinks it. She believes that it will turn her even more beautiful, but instead, while she sings "The Real Ludmilla", she gradually changes into a dragon, as she descends from the tower and abuses the many slaves and prisoners - with body parts gradually "popping" and turning into dragon parts, ripping her clothes as she grows in size. Unaware of her transformation, she addresses the nobles saying "Behold your new Queen!", only for them to run away screaming. As she realizes what she has become, it seems she also loses her ability of speech and rational thought, as she acts like a dumb beast for the rest of the movie.

Once Bartok escapes from the tower, he tries to stop Ludmilla, who is climbing up the palace towers and is destroying things with her fire breath. Enraged, she tries to swat the tiny bat, chasing him up to the tallest tower, which snaps under her weight - not having any wings, she plummets to the ground outside the castle, and the tower crumbles on top of her, crushing her ribcage and ending her life. 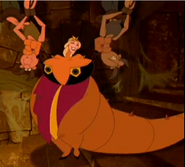 This is the bloated stage! 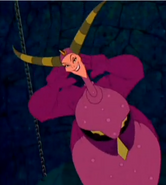 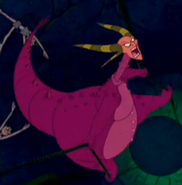 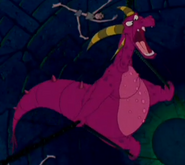 Ludmilla's remains
Add a photo to this gallery
Retrieved from "https://donbluth.fandom.com/wiki/Ludmilla?oldid=30868"
Community content is available under CC-BY-SA unless otherwise noted.