Grundel is the main antagonist of Thumbelina.

He is the eldest of Mrs. Toad's sons who intends to marry Thumbelina (much to the latter's dismay). He was voiced by the late Joe Lynch in his final film after his retirement that same year and his death in 2001.

Grundel is seen to have attributes like a natural toad, but with a thin mustache that is above his lips, in scenes you see few teeth, but as he grins more comes in. He wears a a baby blue clown outfit with a blue orbs on it while the bottom is sky blue. He wears slippers with an indigo fuzz ball on top of them.

Grundel is first seen with his mother, Mrs. Toad in the musical number Let Me Be Your Wings when Thumbelina and Prince Cornelius land on a lilypad near their boat. Cornelius then lifts Thumbelina sitting her on the side of the boat, where she blows a kiss to the toad. Grundel and his mother discuss the beauty of Thumbelina's singing where a lovestruck Grundel says "Mama, I love her." Convincing Mrs. Toad to later kidnap her.

Grundel is seen again as Thumbelina wakes up and is introduced by Mrs. Toad as one of her three sons, amongst his two brothers, Mozo Toad and Gringo Toad, telling Thumbelina they are very rich and famous, claiming she had brought her back to become a famous singer like her. As Thumbelina tries to leave, she is stopped by the toads, including a lovesick Grundel.

During the song On the Road, the toads try to convince Thumbelina not to marry Prince Cornelius for it would "get in the way of her career in show business", and to join them on the road. After the song, Grundel and Mrs. Toad decide that Thumbelina marry Grundel and "keep the money she earns in the family." Grundel, dreamily thinking about his wedding and future with her after his mother tells her she is to marry him is overjoyed and happily saying "I love Thumbelina." Leaving with his mother and brothers to get a priest, leaving Thumbelina alone on a lilypad. Grundel is seen waving at Thumbelina as the toads disappear.

Grundel, depressed that Thumbelina had escaped, is taunted by Mozo and Gringo by saying that she had left him to marry a fairy prince. Angered by this, his brothers continue to tease him saying he wouldn't be able to show his face on stage and he would be a laughingstock. Denying this, and threatening his brothers, who laugh at him vowed to find, bring back and marry Thumbelina.

After Berkeley Beetle had taken Thumbelina, he is informed by Gnatty that the beetle had taken her flying high into the tree above them, enraged, he is yelling that he wants her back, frightening the bugs and laughing as they disappear and goes to find the beetle.

When he finds the beetle, he is seen strangling him and after hearing him saying that he had let Thumbelina go because she was "ugly" angers him, causing him to hit the beetle over his head, telling him she was beautiful after stomping on his foot. The beetle then tells Grundel his plan to win Thumbelina over by capturing and using Prince Cornelius as bait. Ensuring that the beetle doesn't escape, rips his wings off and keeping them until he gets the prince.

When the beetle returns with a frozen Cornelius is glad that he had "killed the prince", accepting the beetle's deal to return his wings if he told the toad where Thumbelina was. He informs Grundel that Thumbelina was buried alive with Mr. Mole. Enraged by jealousy, he forces the beetle to go with him "to rescue" Thumbelina from the mole. The beetle, trying to escape, is knocked down and unwillingly dragged the beetle to the Mole's home.

Grundel is then seen breaking through the roof, crashing the wedding of Thumbelina and Mr. Mole, announcing that he was to marry her. An angry Thumbelina storms past him, saying that she won't marry him and she's going home. Grundel grabs her arm to try and stop her, only to be kicked in the knee, and ends up leading the chase after her along with the beetle and the wedding party.

In the climax however, runs screaming that Thumbelina would marry him and much to his surprise, is challenged to a fight by a revived Prince Cornelius with a torch. As the fight continues, Grundel knocks out the prince with his torch. Thinking he had won, chuckles and continues to go after Thumbelina, but is stopped when the prince grabs his ankle, causing him to dangle off the cliff's edge, grabbing Cornelius to try and lift himself up. Cornelius is stopped by the sound of Thumbelina's screams, and the Toad falls into the bottomless pit in Mr. Mole's tunnel, taking the Prince with him, only to survive the fall and break his leg. 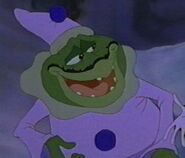 Grundel with his minion Berkeley 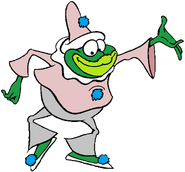 Retrieved from "https://donbluth.fandom.com/wiki/Grundel?oldid=33489"
Community content is available under CC-BY-SA unless otherwise noted.