The Grand Duke of Owls is the main antagonist in Rock-A-Doodle. He was voiced by the late Christopher Plummer.

Duke is a magical owl who despises Chanticleer as well as his passion for rock-and-roll, he overhears Edmond's call for Chanticleer in the real world and transforms him into a kitten as punishment, planning to eat him. The Duke hates his nephew (despite the latter's efforts to please his uncle) and threatens several times to kill him if he fails his duties. He also regularly abuses him which leads to his undoing.

Duke is a malevolent and powerful creature of the night with a penchant for eating smaller animals as meals and commanding other villainous owls to do his bidding, he hates sunlight, like all owls, and recoils when the light is shined on him. Also, he possesses magical breath that can transform anyone into any creature. He also seems to hate eavesdropping as near the end he says "it's frightfully impolite to erm eavesdrop". He is also a rather stoic character always appearing calm and collected only showing fear near the end and in his final scene when he is being chased by Hunch.

Role in the film

The Duke sends an unnamed rooster to the farm to pick a fight with Chanticleer at dawn. Though Chanticleer wins the fight, the sun rises afterward without the aid of his crowing, leading the other farm animals to believe Chanticleer's a charlatan. As Chantacleer leaves the farm in shame, the Duke triumphantly begins his reign of darkness and terror, summoning a storm to flood the farm. When Edmond tries to call Chanticleer back to the farm to bring the sun back, the Duke angrily bursts into his room and transforms him into a cat, as well as transforming his home into the cartoon world of the book from the prologue. The Duke then nearly eats Edmond alive but is interrupted by a bite in the leg from Patou. Edmond shines a flashlight on the Duke, causing him to retreat.

The Duke returns to his lair to lick his wounds and play his gigantic and sinister pipe organ, which produces the storm that's been flooding the farm. As he finishes instructing his owl henchmen to destroy the farm and kill the animals, his pygmy nephew Hunch enters unceremoniously to the Duke's annoyance. Hunch alerts him to Edmond's movement toward the city. The Duke orders Hunch to lead an attack on the toy chest, but is frustrated when he fails (adequately). The Duke gives Hunch another chance and orders him to go to the city, offering only a pair of sunglasses as protection from the bright lights.

The Duke himself leads an attack on the farm but ultimately fails due to the animals' flashlight. However, their supply of batteries is rapidly depleting. After his failed attack the Duke returns to his lair and calls Pinky. He orders Pinky to prevent Chanticleer from speaking to Edmond and the other animals.

The Duke then resumes his attack on the farm. The batteries in the flashlight die and the owls prepare to feast on the farm animals. However, Edmond and the others arrive in Pinky's helicopter and chase the owls away with the spotlight. After Hunch causes the helicopter to crash, the Duke taunts Chanticleer, who is out of practice and unable to crow. Edmond tries to raise Chanticleer's spirit, however, and the Duke strangles him with his magic. Inspired by Edmond's courage, the other animals chant Chanticleer's name, infuriating the Duke. Allowed The Duke grows to an enormous size and transforms into a tornado to destroy the farm and the animals. However, Chanticleer regains his spirit and crows for the sun. It rises on his call and blasts the Duke with its light, reversing his magic and reducing him to a baby owl who is now smaller than the chicks and mouse.

Hunch emerges from the wreckage of the helicopter, spots his uncle and torments him with a flyswatter in revenge for all his abuse. The Duke's ultimate fate remains ambiguous though it could be assumed that Hunch killed him. 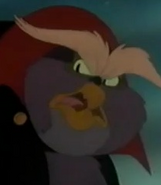 Duke chased away by Hunch