Don Bluth Wiki
Register
Don't have an account?
Sign In
Advertisement
in: The Pebble and the Penguin Characters, Characters, Males,
and 10 more

Drake is an evil and black-hearted penguin who wants to marry Marina. He is shown to be snide and sarcastic, especially when he calls Hubie a nerd. He is not above bullying whenever it comes to getting what he wants.

A few days later, he was seen asking Marina about the plan about the mating season. Marina still refuses despite his stubborn objection and relentless insistence. After Hubie got away from the killer whales, Drake began carrying Marina down the stairs towards the Full Moon Mating Ceremony when he suddenly heard a loud voice and to his shock to find that it was Hubie assuming for sure that he was dead. Drake started to challenge him intent on making sure he stays dead. Hubie was about to charge him, but Drake brutally slammed him with his arm knocking Hubie unconscious. After Hubie gets up, he fights Drake. With every blow Drake made, Hubie countered his attack knocking him down the stairs. When Marina tried to get to Hubie, Drake grabbed still intent on carrying her off against her will. Hubie then bit his leg causing Drake to scream in pain. Enraged, he attempts to finish off Hubie but proves futile with every kick Hubie threw back at him. Drake dives at Hubie but ended getting sucker-punched in the face, completely dazed. Hubie then kicked Drake off the stairs and he fell down to the chasm presumably to his death. Drake reappears lifting a boulder Marina was on in an attempt to crush Hubie, only to killed from being crushed under the falling rocks of his tower.

Drake get furious before his death

Drake falls to his death 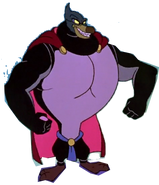