Banjo the Woodpile Cat is a troublesome kitten as well as the protagonist from the 1979 animated film of the same name.

The movie starts in 1944 Utah, with a cat named Banjo chasing chickens. His sisters tell his father who scolds him for it. Some time later, Banjo jumps off the roof, along with pulling His sisters’ tails down the chicken coop. He gets in trouble and runs away to avoid serious punishment, riding on a seed truck to Salt Lake City.

Hours later, It starts to rain and he misses his family. Banjo meets a cat named Crazy Legs. They try to get back to Banjo's home and end up at a Night Club Crazy Legs recognizes. They meet three female signing cats who sing to cheer him up. The five of them look for the feed truck so Banjo can go home. Crazy Legs and Banjo get chased by dogs and manage to escape to the singing cats’ home.

The next day Banjo finds the feed truck and gets on after saying goodbye to His new friends, allowing the kitten to return to his family.

Banjo is an orange kitten with a cream-colored face, stomach, paws, and tail tip. And is slightly bigger than His sisters, Emily and Jean.

Banjo smoking out of the snowman's pipe.

"I'm gonna run away from home, that’s what." 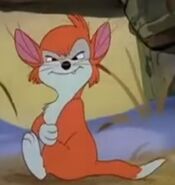 Add a photo to this gallery
Retrieved from "https://donbluth.fandom.com/wiki/Banjo?oldid=32173"
Community content is available under CC-BY-SA unless otherwise noted.