Annabelle (recredited as the Whippet Angel in the first film) is a character from the All Dogs Go to Heaven series. Annabelle didn't care for Charlie's cunning her in the first film and she told him that, because of his act of winding his watch and going back to earth, he would not be able to return to Heaven, but when Charlie gives his own life to save Anne Marie, Annabelle is all too willing to let him come back. But in the second film, the television series, and the third film, she assigns Charlie and Itchy missions. Also, Annabelle has an evil cousin named Belladonna. She is voiced by Melba Moore (All Dogs Go to Heaven) and by Bebe Neuwirth (remainders of the franchise).

Beautiful, kind-hearted, helpful, and friendly with others, Annabelle is the archangel dog of Heaven. She takes her job very seriously and has a large sense of duty. She is known to get easily excited when things go wrong, and has little patience with Charlie and his laziness, but she seems to have great faith in him and Itchy knowing they could be counted on.

Annabelle is an archangel whippet with pink fur and wears a purple necklace with a red heart on it and a pinkish-red ribbon in her hair.

All Dogs Go to Heaven

After Charlie is struck by an automobile because of Carface, he enters heaven where he meets the whippet angel Annabelle, who explains to him that all dogs go to heaven by default since they are naturally good, loyal and kind (especially despite all Charlie has and has not done when he was alive). She welcomes the angry and revenge stricken Charlie and presents to him his "life clock" (stopwatch), but warns him that winding it is not allowed. Charlie then proceeds to distract the whippet angel and take the watch, winding it up much to her chagrin, and falls back to Earth. Once revived, his watch opens and Annabelle's voice is heard through the watch warning him that he could never come back, indicating that if he dies once more he will be sent to hell instead, a warning Charlie chose to ignore. Long after Charlie's return, he is asleep in an old church, and has a terrible nightmare about going to hell from remembering Annabelle's warning, which her voice is heard again through the clock.

When Charlie risked his life saving Anne-Marie from a burning ship and loses his watch in the process, he is sent to hell, but is giving the chance by the hellhound to visit her in her new home to apologize for betraying her. He is about to leave when Annabelle, in the shape of a glowing orb, vanquishes the hellhound and allows Charlie to re-enter heaven due to his sacrifice, and after saying goodbye to Anne-Marie, he and Annabelle return to heaven. Carface enters heaven after getting eaten by King Gator, and attempts to return to earth by winding his "life clock" (alarm clock). Annabelle is last seen yelling and chasing him out of heaven after he dismisses her warning to him.

All Dogs Go to Heaven 2

Annabelle appears handing out Merit badges to well-deserving heaven dogs, including Carface who has so called "redeemed himself," except Charlie who has yet to earn one. After Carface steals and loses Gabriel's horn, Annabelle announces the news to all of the heavenly dogs and was at one point going to send one of them on a mission to retrieve it. Charlie seeing this as a way of leaving heaven (which he has grown bored of), insist that he should be sent. A hesitant Annabelle instructs him on how to find it and gives him 1 miracle for emergency use, even sending heaven newcomer Itchy to accompany him. During his time on earth, an impatient Annabelle begs Charlie to hurry, but is constantly ignored, and becomes disappointed in Charlie when she witnesses him dumping the now found horn (inside a lobster cage) into a lake. After Red takes the horn, he imprisons all angel dogs, including Annabelle... except Charlie and Itchy. After Charlie retrieves the horn, he, under Annabelle's instructions, blows it to defeat Red and free the angel dogs, especially Annabelle.

Eventually, Annabelle gives not only a Merit badge to Charlie, but also permission to stay on Earth.

The series makes several changes to the second film. For example, Charlie and Sasha were shown as being together at the end of the second film, however, in the series, they seem to have never had a first date together. Also, in the second film, Itchy decides to stay in Heaven, but he is alive in the series, although it becomes clear later in the series why he is on Earth instead of being in Heaven. Charlie and Itchy live in San Francisco as guardian angels, being told of their missions by Annabelle. The series is a family sitcom, with Charlie and Itchy becoming embroiled in several misadventures in each episode, while trying to do the right thing. Charlie’s villainous rival Carface and his sidekick, Killer, also appeared in the series, as did Charlie’s dog friends, Sasha and Annabelle. The series also featured an antagonist named Belladonna, Annabelle's demonic cousin.

The episode "La Doggie Vita" is Annabelle's only singing appearance other than the first film.

An All Dogs Christmas Carol

The film opens with angel puppies talking to Annabelle. They ask her to tell them a story. She begins to tell them about how Carface saved Christmas with a little guidance from Charlie and Itchy.

The movie begins in an alleyway with Charlie, Itchy, Sasha and their friends decorating for a Christmas party. Everyone is enjoying themselves as Charlie and Itchy tend to the young pups. Charlie checks on Sasha and the money collection for Timmy the puppy's operation for his bad leg. Unfortunately, Carface and Killer arrive and start collecting debts from everyone. After Charlie refused to pay back Carface, he blows a mysterious hypnotic dog whistle that hypnotizes all the dogs and causes them to give Carface and Killer all of their bones. Before leaving, Carface and Killer make off with all the food, the presents, their money which includes Timmy's operation money and head off cackling.

After failing several times to get the stolen goods from Carface, it is revealed that Carface is working for Annabelle's satanic cousin, Belladonna, who plots to use a massive version of the gigantic hypnotic dog whistle to hypnotize every dog in the city into stealing the Christmas presents, causing them to be thrown out of their houses and abandoned, much in the same way Carface was when he was a puppy. Charlie plots to scare "the Dickens" out of Carface and asks Annabelle for some aid, resulting in them being transformed into characters from A Christmas Carol by Charles Dickens. Itchy becomes the Ghost of Christmas Past, Sasha becomes the Ghost of Christmas Present, and Charlie becomes the Ghost of Christmas Future with a Gospel-style song-and-dance. The three of them visit Carface and make him feel guilty about stealing the items, especially the operation money; Sasha tells Carface that without it Timmy will die, but Timmy's death will cause another his own, as the Ghost of Christmas Yet to Come shows him that because of his actions, he will cause his own death, and he will be condemned to Hell for eternity.

Carface, having seen himself in Timmy, stops the whistle just in time to prevent the dogs from stealing the gifts. Belladonna flies into a rage and is about to kill Carface and Killer when she is frozen solid by a massive amount of snow caused by Annabelle.

Meanwhile, with Charlie and the gang, it starts to snow. Everyone celebrates, but Itchy remarks that it's a shame that they didn't have any presents to give the pups. Just then, Carface appears on a sled pulled by Killer, and gives them all the presents back, and more. He even gives them Timmy's money box back, which is filled up full. Carface turns to leave, and Sasha asks him to stay and join the party. Carface respectfully refuses, saying he's going to visit his mom, but wishes everyone a Merry Christmas.

Annabelle finishes the story by saying "Merry Christmas!" and she and the angel puppies wave to the audience.

This dog (who only appeared in two Season 3 episodes of the TV series) is superior in Heaven to all angel dogs, even to Annabelle. 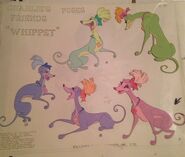 All Dogs Go to Heaven

All Dogs Go to Heaven 2

Retrieved from "https://donbluth.fandom.com/wiki/Annabelle?oldid=32837"
Community content is available under CC-BY-SA unless otherwise noted.