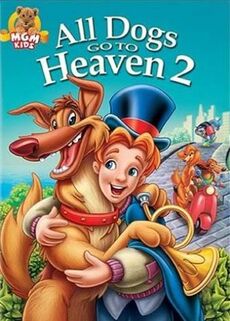 Many years after the first film, Charlie Barkin remains in Heaven as an angel and waits for the new dogs to arrive in Heaven, one of whom being Charlie's best friend, Itchy Itchiford, who died while choking to death on a chicken drumstick. Charlie welcomes Itchy into heaven and shows him around, but reveals that he's been bored in Heaven since his death (It's Too Heavenly Here) and wishes to return to Earth. Then Charlie's old nemesis, Carface, secretly steals Gabrielle's Horn and causes it to fall from Heaven to Earth, and Carface secretly escapes from Heaven to Earth. Annabelle, the Head Angel, sends Charlie and Itchy to Earth to retreive the horn and gives them one miracle to use while on Earth.

Once on Earth, Charlie and Itchy arrive in San Francisco and Charlie begins exploring a dog tavern, where he notices a singing Irish Setter dog named Sasha La Fleur and falls in love with her. He tries to get her to notice him, but she can't see nor hear him because he's a ghost. Then Charlie spots Carface with a red collar around his neck that makes him visible. He tells them he got the collar from a dog named Red, who would probably be happy to give some to Charlie and Itchy as well. They follow him to Red's place, where Carface introduces them to Red, who gives them each a collar, making them both visible, though he tells them the collars will only work until sundown tomorrow and then they will be ghosts again. After Charlie and Itchy leave, it is revealed that Red is actually a cat/devil disguised as a dog and hired Carface to steal Gabrielle's Horn so he can imprison all dogs from heaven and rule the world.

Charlie and Itchy go back to the tavern and introduce themselves to Sasha, who takes them to her home and shows them a little boy named David, who has run away from home. Charlie and Itchy ask them to help them find Gabrielle's Horn.

All Dogs Go To Heaven 2/Transcript

Retrieved from "https://donbluth.fandom.com/wiki/All_Dogs_Go_to_Heaven_2?oldid=10830"
Community content is available under CC-BY-SA unless otherwise noted.